Of course some people think that etiquette is about knowing which fork to use for what at formal dinners, and how to fold your napkin afterwards. But where I live, most people don’t bother about cutlery, and if they ever use a napkin, they certainly don’t know how to spell the word. People around here think etiquette is old-fashioned and unnecessary. So here’s an easy to use, modern version of etiquette, adapted to the needs of The People in The Street. Too bad it’s my street.

Pedestrians
Pedestrians should use the pavement, but when it’s crowded with dog shit, chewinggum, still burning cigarette butts, children, skaters, cyclists or parked cars, it’s ok to use the street. Never mind cyclists, cars or any other motorized traffic, because it’s their fault if you should happen to be overrun by one of them. You never have to look around before crossing the street. Zebra crossings grant pedestrians immunity. You don’t have to look around. Just walk on, whatever is coming at you at whatever speed. It’s fully allowed to curse anyone who doesn’t stop for you. 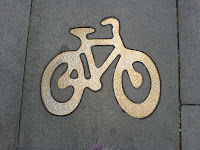 Cyclists
Because you have half the amount of wheels of a car, you have double rights. Pavements are really bike lanes. Never mind the pedestrians. Light is optional, and you should never have any lights on unless you know there’s police around, and even then only when you know they are checking cyclists. If the traffic light doesn’t go green fast enough, feel free to use any other traffic light if it’s green. Orange is just another shade of green. Red means green if you think you can make it.

Cars
If you drive a car, it’s important to know that size matters. The smaller your car, the louder you should play your music. It’s important to choose the right car. Small Renaults and Citroens are for girls. Ford K‘s are for girls, designers and gay people. If it’s black and has tdi or anything turbo at all, traffic rules don’t apply to you. Speed limits should be considered as guidelines. It’s perfectly ok to honk or give the finger to anyone who drives slower than the speed limit, because they are not being social and honking is a kind way to point this out to them. Parking spaces can be a nuisance. They tend to be on the small side, so it’s ok to take two. If someone beats you at taking that last parking spot, turn down your window and claim what is yours, but only do this when the person who took the parking place is bigger or stronger than you. Otherwise it’s more polite to get out and arrange matters by hand, or fist.